“Help us prevent a mining disaster. Our lake is at stake.”

That’s the Rock Creek Alliance message as we enlists citizens to raise their voices against the Rock Creek Mine in a full page ad in the current Summer 2016 edition of Sandpoint Magazine. The ad is part of our ongoing efforts to raise awareness of the proposed mine. 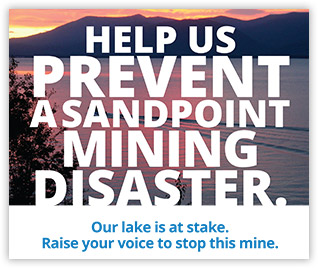 The ad points out the jeopardy to Lake Pend Oreille and Sandpoint, just downstream of the mine site.

“Sandpoint has everything to lose and absolutely nothing to gain from this monster of a mine,” the ad concludes.

The Draft Supplemental EIS (DSEIS) for the proposed Rock Creek mine has been released for public comment by the Kootenai National Forest. If you are a long-term resident, you are probably familiar with this proposal and remember the controversial public hearings that took place in the mid-to late 90’s, the protest marches across the Long Bridge, and the series of lawsuits filed by the Rock Creek Alliance that have kept mine developers from turning ground.

The Rock Creek mine would be an underground copper/silver mine constructed beneath Montana’s Cabinet Mountains Wilderness. The mine would excavate 3.5 million tons of ore per year for 30 years, creating over 1 million tons of waste rock.

Not much about the mine has changed in the 15 years since the Forest Service first granted an approval:

The mine still proposes to create a perpetual discharge of heavy metals to the Clark Fork River, which supplies 90% of the water to Lake Pend Oreille. The cumulative impacts from this long-term discharge have never been analyzed.

The mine’s potential to create acid mine drainage has never been adequately quantified and has been consistently underestimated. Rather than using site-specific data, analyses rely on information from the Troy mine’s ore body, which contains less acid generating minerals.

One hundred million tons of mine waste would be stored next to the Clark Fork River in a pile covering over 300 acres and rising to a height of 300 feet. These tailings would generate seepage bound for ground water that would then enter the Clark Fork River.

The seismic safety calculations for this massive tailings dam don’t meet Montana’s regulations, and the construction method chosen is prone to failure. It’s the same method used at the Samarco Dam in Brazil, which collapsed in November killing 19 people and burying villages in the path of the mine waste. Experts estimate that between one and four breaches occur each year at tailings dams world-wide, roughly 10 times the failure rate of water dams.

The mine would deposit saturated “paste tailings’ on the surface rather than placing them in the underground mine void (backfilling). Nearly all modern mines use backfilling because it reduce the amount of tailings stored on the surface and the seepage of metals to ground water, while lowering the risk of an impoundment failure. Backfilling has been dismissed due to the cost to the company.

If you are worried, you should be. If you care about Lake Pend Oreille and the Cabinet Mountains Wilderness, now is the time to get involved by sending in a comment letter. You have until April 19, 2016.

For more information on where to send your letter and crucial points to raise, visit our Urgent Action page.

The Forest Service’s Draft Supplemental Environmental Impact Statement for the proposed Rock Creek mine is up for public comment. The mine, if approved, will pose grave threats to water quality in Lake Pend Oreille just downstream, and have massive impacts on the Cabinet Mountains Wilderness.